ESL One Cologne 2018 will be a premier tournament to remember, hosting a celebration of all that is CS: GO. The event will take place […]

ESL One Cologne 2018 will be a premier tournament to remember, hosting a celebration of all that is CS: GO. The event will take place at the Lanxess Arena between 6th July till 8th July 2018, gathering a passionate gaming community of Counter-Strike fans from the four corners of the world. The CS tournament will feature sixteen professional teams who will compete for their share from a prize pool of $300K.

A passionate esports community will unite to witness all the action at the prestigious premier tournament, ESL One Cologne 2018. Running in its fifth year, all the legendary CS fighters will land in Germany to carry out their mission to acquire their place in the main esports event.

ESL One Cologne 2018 is one of the matches that form part of the Intel Grand Slam Season 1. This will determine the top CSGO team to receive a prize of $1 million. So far Astralis, Faze Clan and MIBR (former SK Gaming) have won 2 tournaments each, while Fnatic, Ninjas in Pyjamas and G2 Esports have earned 1 victory each. These teams will get to participate in the ESL match in Germany but which squad has the potential to reach the Grand Finals?

With every year that passes ESL One Cologne is a much-awaited esports tournament that has gathered a following of over 15,000 people. Witnessing the live matches in the arena is just as exciting, hearing the loudest cheers from esports fans watching the intense action while also CSGO betting on their favourite teams. The Counter-Strike match will be one to remember, a celebration of all that is competitive gaming. In last year’s ESL One Cologne 2017, esports fans saw Cloud 9 win over Navi and SK beat Faze Clan in the Semi-Finals. The grand final featured SK Gaming that defeated C9 with an incredible score of 3-0, taking home their first prize of $100K. 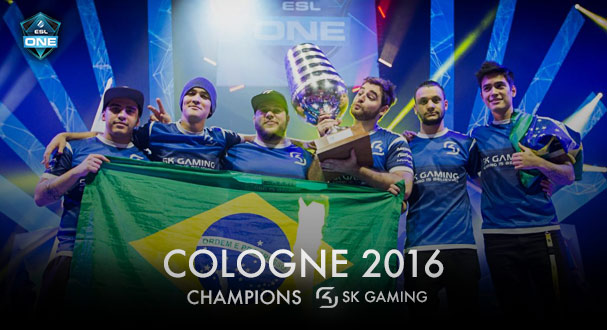 The ESL One Cologne 2016 was the second CS: GO major that offered a total prize pool of $1 million. The Brazilian squad, SK Gaming took the title by winning the finals against Team Liquid with the unbeatable record of 2:0, taking home the reward of $500K. SK’s Coldzera won the MVP award of the Electronic Sports League in Cologne 2016.

At the moment of writing, 11 CSGO squads have been invited to take part at ESL One Cologne 2018. These include Astralis, BIG, Cloud 9, Faze Clan, Fnatic, G2 Esports, Team Liquid, Mousesports, Navi, Ninjas in Pyjamas and MIBR. Five more units still have to go through the qualifying matches, so that all lucky 16 teams will get to compete in the group stage which will be held on 3rd till 5th July 2018.

The ESL One Cologne Playoffs will kick off the main event on the 6th of July in a single elimination bracket, where the Quarterfinals and Semis will be in a best-of-3. The top two CSGO teams that reach the grand finals will fight each other in a best-of-5. May the best CS squad team win the tournament…

The greatest win so far in 2018 was at the Eleague Major Boston 2018 beating Faze Clan 2-1. They have managed to place second in the WESG 2018 NA finals as well as CS Summit 2. They have recently performed poorly at the ESL Pro League Season 7 Finals losing to Heroic and at the IEM Sydney losing to Faze Clan. The CS players have been lost in the clouds the past few months, will they wake up and work together to win matches at ESL One Cologne 2018 to be on Cloud9? The Ukrainian CS: GO, team, Natus Vincere have achieved their best at the StarLadder Season 4 and Dreamhack Masters Marseille 2018, where they finished in second place in both events winning a prize of $50K. The squad have struggled in the recent CS tournaments losing to the likes of Team Liquid, Astralis, Godsent and Mousesports. Despite this, Natus Vincere has placed in the top four placements. Navi may not be one of those strong teams that win matches but they do make an effort to place better. Will the Born to Win team go through to the Semi-Finals? The German team, Berlin International Gaming need all the support they can get in their home country. The CS squad have recently taken part in the major tournament, ESEA Season 27: Global Challenge where they beat Team Spirit with a score of 2-0. The squad have beaten Godsent at Play2live Showmatch by GameAgents and Gambit Gaming in the qualifiers of the ESL One Belo Horizonte. Do they have what it takes to go through the Group Stage?

TL’s greatest win so far was at the Major CS Summit 2, surprising the esports scene winning against Cloud9. In the StarLadder Season 4, Team Liquid has beaten Faze Clan and in qualifying matches won against the likes of Renegades and NRG. Over the past few matches, Liquid has managed to place in top four ranks at the ESL Pro League Season 7, ECS Season 5, DreamHack Masters Marseille 2018, among many events. Will they improve on their mistakes to advance past the group stage?

Another German Team, Mouz will get all the support they need competing in their home country. Their greatest achievements so far were winning the StarLadder Season 4 title beating Navi and V4 Future Sports Festival – Budapest 2018 where they took the championship title, defeating Virtus.Pro with a score of 2-1. Over the latest esports matches Mouz has improved their winning chances but on occasion, they also lose matches. Will the Germans prove to be a strong team in the upcoming ESL One Cologne 2018?