BLAST Pro Series Los Angeles is the next stop for RFRSH Entertainment. As the name suggests it will take place in Los Angeles, California from […] 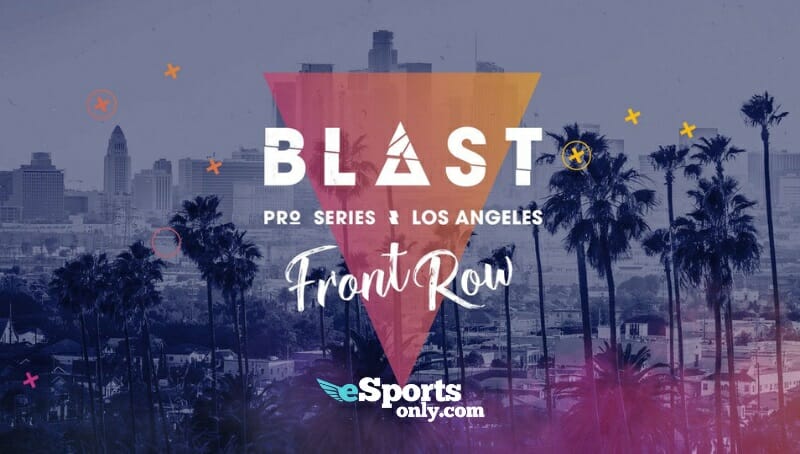 BLAST Pro Series Los Angeles is the next stop for RFRSH Entertainment. As the name suggests it will take place in Los Angeles, California from the 13th -14th of July. As previous BLAST events, it will offer $250.000 in prize money for competing teams. However, this BLAST Pro Series event will be different from previous iterations. For starters, it was revealed that the event will no longer take place in the Galen Center, of 10.000 seats and will be held in a more “intimate environment”. This event will also be the first BLAST Event without Astralis in attendance. As for format changes, there will be 3 bo3’s played out, instead of the usual one in the grand final. These changes are interesting for BLAST and their approach to CS:GO’s competitive scene.

Los Angeles is the 8th event of the BLAST Pro Series circuit. RFRSH Entertainment has really amped up the BLAST events for 2019. They have had as many BLAST events this year as 2017 and 2018 combined. Not to mention the constant change in locations, from Copenhagen to Sao Paulo and now Los Angeles.

As impressive as this reach sounds, the RFRSH entertainment brand has come under heavy criticism from the CS:GO community laterly. One obvious complaint was the ties between Astralis and BLAST Pro Series, as RFRSH entertainment owns both of the aforementioned entities. It has become very apparent that conflict of interest is a possibility. Astralis, at the time, number one team in the world would skip proper tier 1 event like Dreamhack Masters Dallas and IEM Sydney to participate in exhibition type event like BLAST Pro Series.

In aims to score points with the dissatisfied CS:GO community, RFRSH announced the BLAST Pro Series Global Finals. During the regular BLAST events, teams gain points, depending on their placement in any event. The 4 teams to rake up the most points go on to the 500.000$ BPS Global Finals. Even though this change adds more weight to the BLAST events, it’s important to note, that only 7 teams, who signed contracts with BLAST can acquire these points. Even if ENCE won Madrid and they technically receive 10 points, because they are not in the contract, they don’t get to attend the event.

One of the issues with BPS events has been their format. All a team needs is to play a maximum of 8 maps and they can be crowned victors of a 250.000$ event. For example, a borderline tier 2 event like Dreamhack Summer Open requires a team to play 6 maps and could play as much as 13 maps before they can claim the crown.

A much-welcomed change is the addition of two extra bo3’s. This means 4 teams will move from the round-robin stage, instead of just 2. Teams will have to play more games before they can secure a trophy. We’ll have to wait and see how it plays out in BLAST Pro Series Los Angeles.

Here’s a brief analysis of the teams of BLAST Pro Series Los Angeles.

After a painstaking 2018, Liquid has finally achieved the number 1 spot. No longer are they crowned 2nd, they are winnings events. One of the reasons for their success is their kryptonite, Astralis, not attending these tier-one events. Because of this, Liquid would face someone like Fnatic at IEM Sydney Grand Finals and ENCE at Dreamhack Master Dallas.

The addition of Stewie2k elevated Liquid to the next level to allow them to win events. On the other hand, by losing TACO, it seems Team Liquid lost some of their consistency. No longer are they capable of breezing past the group stages of events. It is taking more effort for Liquid to succeed against the lesser teams.

Based on any CS:GO Betting Odds out there, a Grand Final appearance is the minimum expectation from liquid. In the absence of Astralis, there seem to be two teams who are able to contest Liquid, that’s ENCE and FaZe Clan. The latter will also be attending BLAST Pro Series Los Angeles and might prove to be their most challenging opponent.

FaZe Clan has had serious issues finding a 5th player for the team. Ever since the departure of karrigan, it has been very difficult to fill that void. At the start of 2019, FaZe Clan announced the signing of AdreN. It was an odd choice for the team since this wasn’t a huge upgrade in terms of fragging nor was AdreN an IGL. To make things worse, FaZe’s long-standing players were having a difficult time fragging, especially olofmeister and Guardian.

It was announced that NEO has returned to play in this new FaZe roster. Nothing much was anticipated from the reformed roster heading into their first event together in Dreamhack Masters Dallas. But FaZe secured bo3’s wins against Windigo and Ninjas in Pyjamas. One also must mentioned how both Windigo and NiP had stand-ins at the time.

What gives us hope that FaZe Clan are getting back to the top is how they almost succeeded in winning against Team Liquid (who went on to win the event) in a full-fledged bo3. The players also showed promise, as both Guardian and Olofmeister had a resurgence in their form under the leadership of NEO.

There’s no denying it, MiBR are not looking good going into BPS Los Angeles. In ECS Season 7 the team was looking so good against North. Coldzera dropped 27 frags when the team was leading 14-3 on Inferno. With such a massive lead the impossible happened and this roster crumbled underneath pressure. North made a miraculous comeback and dragged the game to overtime, eventually winning the match. Unfortunately, things didn’t get better in their game against Complexity, as MiBR got schooled on their map of Train 16-4 and even lost the bo3 2-1.

How does their form look coming into Los Angeles? Bad on all accounts. The odds are stacked against them and it’s hard to say how they will perform. With the new format, it’s possible they might reach the playoffs but nothing more than that.

The addition of Tarik has been a welcoming improvement for this team of youngsters. It looked like they are finally able to break away from Top 10 and begin contesting for at least top 5 in the world. But the team still couldn’t pass that hurdle. They’d go to IEM Sydney to beat MiBR and FaZe Clan 2-0 but couldn’t win over the eventual grand finalists Fnatic in the semi’s. NRG Esports had another semifinals appearance in. cs_summit 4, however they ended up losing the match to their North American competitors Team Liquid.

After their disappointing performance at ECS Season 7, NRG’s ex-IGL Daps left the team. It seems like this event was the straw that broke the camel’s back. Following Daps departure, NRG Esports decided to go for Stanislaw from Complexity Gaming.

It’s hard to say whether NRG got themselves the upgrade they needed. Yes, Stanislaw can handle himself in gunfights and is a more skilled individual, but will he bring the same amount of leadership to players like Cerq, Breehze and Ethan?

RFRSH entertainment has announced that Renegades will be the 6th team to attend BLAST Pro Series Los Angeles. It’s another Wild Card invite and one that might shift the balance. Renegades have dropped-off the past couple of months. The reason; their inability to play with Gratisfaction in their roster, due to visa issues. Now that the player is back, the team can begin their practice schedule and get back to the top 10.

Renegades will have over a month of practice before BLAST Pro Series Los Angeles can begin. This is the opportune times for them to get back on track, but it’s still unknown whether the team can pull-off a major-like performance.