Ok so this is going to be one big rant, but one that I deem necessary at this point. I had originally written drafts about the new champion reworks and their abilities in order to tie into last week’s talk about the new mid-season items, but that had to be shelved so that I could spare a few moments to talk about something that I have a personal issue with. See, a few months ago, insider information about League of Legends was leaked to the public. This information included details about champions that were being reworked and what their new abilities would be, and for the most part they were correct (at least in relation to the champions that have been released so far, Zac and Maokai). Also included were leaks about champion skins that were still unrevealed at the time, as well as a mention of not one, but two champions that were in development at that time (intended to be “duo champions”); these were later revealed by Riot to be Xayah and Rakan. More than half of the leaked skins were also confirmed to be real (Darkstar Skins, Cosmic Reaver Yi, Pulsefire Caitlyn), with the latest being Angelblade Riven and Demonblade Yasuo (no names have been released yet, but the published image shown below is pretty revealing). 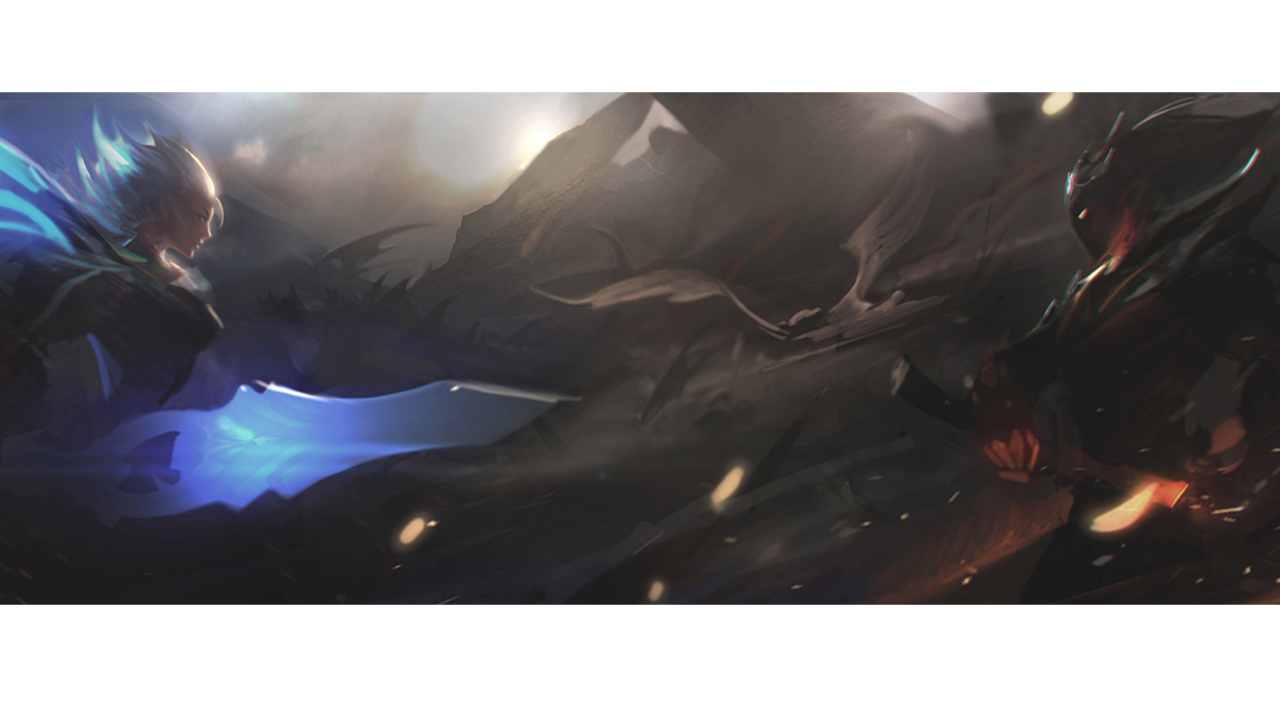 When I first stumbled upon these leaks, I was extremely skeptical yet quite intrigued at the same time; this was big news. Then the Xayah and Rakan teasers went up, and I grew excited; these leaks were potentially real! This was followed by skin releases that matched up with what the leaks predicted, as well as information about champion reworks that also confirmed what was revealed in the leak (except for the sticky sapling bomb). 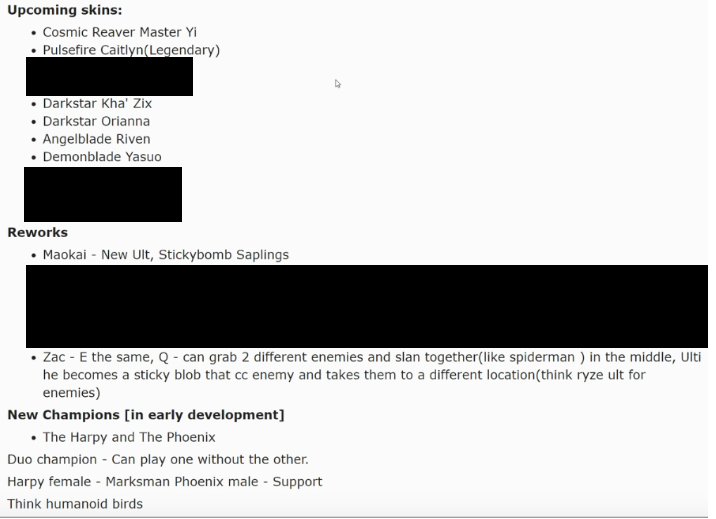 Then something happened. As Riot continued their normal release schedule, I realised that I was no longer excited about what they had to show. The new skin announcements were “meh” at best because the excitement of learning about the skin had passed, and the reworked champions had less of an effect on reveal because I already knew what to expect. Of course, there is still more material that needs to be confirmed, but more than half of what has been leaked hit right on the spot, and every item from whatever’s left is big enough in itself that it would have been amazing to experience as an actual reveal.

Now don’t get me wrong, I know that this sounds nitpicky and I obviously still got to enjoy the material once it was released to the public, but that’s not the issue here.

See the problem with these sort of things is that they’re exciting at first, yet they end up sucking out all the fun out of upcoming announcements. Sure, knowing what’s coming up next may be enticing, but imagine how that would feel like if it had to be transferred to your favourite book/movie/game/series/etc…

“But you can’t compare a game character reveal to a series’ storyline!”

Spoilers are meant to do one thing, and that is to spoil the experience for whoever is involved, including the content creators themselves, who are robbed of the right to have people experience their work as intended by them. And that’s what needs to be stressed; this is information that nobody outside of Riot should have known about. These reveals are planned out, with Riot even having their own team dedicated to delivering news of upcoming content; releasing such a list of information robs the creators of the opportunity to share their information themselves.

So why now? Why am I writing this piece now when the leaks were revealed months ago? Well because within the last few days, someone apparently thought that it would be appropriate to release yet another set of leaks. The original post has since been deleted, although there are still ways of obtaining the information, none of which will be linked to from here. See this is something that also affects me as a content creator; I’m currently working on my own original work, and having everything be spoiled to the public would be quite unfortunate to say the least. Part of the pleasure of being a content creator is the rush that you feel when you know that people will be experiencing everything the way that you intended them to. Having that stripped away from you can be quite devastating within itself.

The whole point of me writing this isn’t so that I can sit here and tell you what to do or not to do, but rather to try to spread some word on what it might feel like on the other end of the spectrum. Yes, getting to know of certain information early is exciting, but even that fades away once the content is actually rolled out. I myself have stumbled upon the mentioned leaks, which is why I’m writing this in the first place. Anything revealed is well worth the wait, and it is my suggestion to simply do so. After all, these leaks might very well be fake, even if they are being treated as legitimate.

I know that this may seem like a long post of a guy whining about something he maybe shouldn’t be whining about, but in the end it all boils down to a matter of opinion. Maybe I’m in the minority here, but it’s my view. Do you agree that these leaks should keep on happening? What’s your overall opinion on the matter? Let me know in the comments, and next time I’ll hopefully be back with the intended material being released.