On the surface of every esport title out there, the skill of an individual is reflected by his numbers (like csgo stats for example). We can clearly tell that a player with 20 kills per game, has had a bigger impact than an individual with measly 5 kills. If your headshot percentage isn’t as good as the next guy’s, it’s obvious that you’re worse at the game. We take it for granted what these arbitrary numbers tell about our performance, the opponents and even the professional scene. But are the numbers the most important value whilst discussing an individual’s ability to play the game?

Let’s look at a common example. In the realm of CSGO casual play, the simplest way to determine a skill level is ranks. We know that Legendary Eagle (LE) is a higher rank than Master Guardian Elite (MGE). So we can already state that the LE player is better at the game than the MGE. That seems to be about right. But if we compare the two individuals by their statistical value we might see that the MGE player has shown to be a better player overall. He has higher CSGO stats on average with a HS percentage of 50 and a KD 1.2, far better than LE’s average HS percentage of 32 and a KD of 0.99. So does that mean the ranking system is at fault for placing an individual with a more skilled peer group? Not necessarily, no. We don’t know the number of impactful frags either player has made, what role they were playing, positions etc. This isn’t just a problem in the casual play of CS, but parallels can be drawn to the professional scene as well. What CSGO stats to look at?

A good place to start would be dissecting the meanings of some CSGO stats. There’s Kill to Death ratio or KD for short, which represent the amount of killed opponents as well as deaths. The basic premise and for a long time, a de facto representation for an individual’s skill. If Player X has 22 kills and 12 deaths, he’s obviously better than Player Y with his 10 kills and 16 deaths. However, as all things aren’t created equal, so all kills aren’t of equal relevance. Just because the number is bigger, it doesn’t mean that a player had more impact in a match. Because CSGO has an economy, there will be moments when you end up killing fully equipped opponents and sometimes they won’t even have any kevlar to boot. But if you haven’t seen the match and just take a look at the post-match CSGO stats you’ll see that, for example, player X has 22 kills, player Y sits with 19, thus the former player can be regarded as better. There’s also the situation with deaths. We can’t be certain if someone with more deaths has made less of an impact in-game, than a player with less deaths. There’s obviously a case to be made for roles and in what position you end up playing. Maybe you the one trying to find opening frags and a lot of times, become the first man of contact.  Maybe you have been the one saving weapons for the next round. These are just some of the reasons why KD isn’t always the best metric.

Headshot % is a pretty obvious one. This CSGO stat shows the percentage of kills that involved headshots. But does it really end up proving a player’s worth in the team? Sure, if an individual like Scream ends up hitting those nice one taps, they are very impressive to witness. But by having this one playstyle and not adapting, Scream has made himself obsolete by the year 2018. Of course, it’s also a stat which doesn’t make much sense if you are an awper. If you take a look at the stats of a player like jdm64, you’ll see that his headshot percentage is in the red (below 30%). And that’s really the case with most if not all primary awpers in CSGO.

For those not really interested in taking a look at all the numbers available, back in 2010 HLTV introduced rating (or rating 1.0 as it is known nowadays) “to improve upon the then commonly used K/D Ratio with the hope that a quick glance at Rating gives a better idea about a player’s performance”. Since the introduction, it has been a way to combine stats like KD, impact rating and survival rating. In general, we could now assume, that a player, at the end of a match, with a higher rating, say, 1.2 is better than 1.1. But again, this is but a vague number. It doesn’t give us a full story of how the match went on. By just looking at the CSGO stats like rating, we can’t really tell if those kills were impactful, from what positions those kills were made, were they against full buys or eco’s. If anything, this gave a lot of fans the ability to spin the constant narrative of “Team X should replace player X with Y, because player Y from team Z has a higher rating” without knowing any better.

The situation of CSGO stats has improved since 2010. In fact, HLTV.org made some revision to their rating system and called it rating 2.0. There are more variables involved constructing these number and it helps paint a better picture of a player’s performance. The main two additions of this change are KAST and ADR.

KAST – Percentage of rounds in which a Player either had a Kill, Assist, Survived or was Traded

KAST is a CSGO stat percentage of rounds with a kill assist, survival or traded death. This is a much needed numeral for players that haven’t been in the for-front of impactful kills. Players like Taco didn’t get all the praise from the community due to him having a poor rating. His kills were non existent, and his deaths were high, so he became an easy target for the community. However, in-game he was the one supporting his teammates allowing them to flourish by being the water boy. With this new rating, it helped improve his numeral value from the previous 1.0 version.

ADR – Average Damage per Round

And the addition of ADR (average damage per round) shows us an impact a player can have throughout the match. This metric shows whether the player is showing as a consistent performance during a map or series. More often than not, players can rack up multiple kills just in a couple of rounds and remain absent from the series. Now we can have a better understanding of an individual’s consistency. Can't Compare Apples To Oranges Just Because They're Fruit

Remember the example about ranks from CSGO? Let’s take a closer look at the pro scene by comparing two individual players: gla1ve and s1mple. If we were to take a look at their CSGO stats, provided by HLTV, s1mple is far ahead from g1ave. He’s got a rating of 1.35, KPR of 0.88, impact 1.35, opening kills 0.15. Now if we were to compare the same statistic to gla1ve, we get a rating of 1.11, KPR 0.69, Impact 0.98, opening kills 0.10. Without a doubt, Aleksandr trumps whatever Lukas has shown us during 2018. In a numerical sense, that is absolutely true. But in the server, they serve very different roles for their teams. We have the IGL for the best team in the world gla1ve, and there is the most skilled player and star of Na’vi – s1mple. Whereas a guy like s1mple is the primary driving force for his team to win anything (alongside electronic), gla1ve can have an easier time as he has 4 other teammates, which do a very good job at the fragging department. And him being the IGL, there’s a lot more theory-crafting of tactics, new ideas, and set-ups, thus having less time to improve individually. That’s why some of his other CSGO stats are better than s1mple’s like flash assists, APR and surviving. These are important attributes to a player who might not find the skill to compete with the best in the server, but still, have his head in the game by making necessary calls. 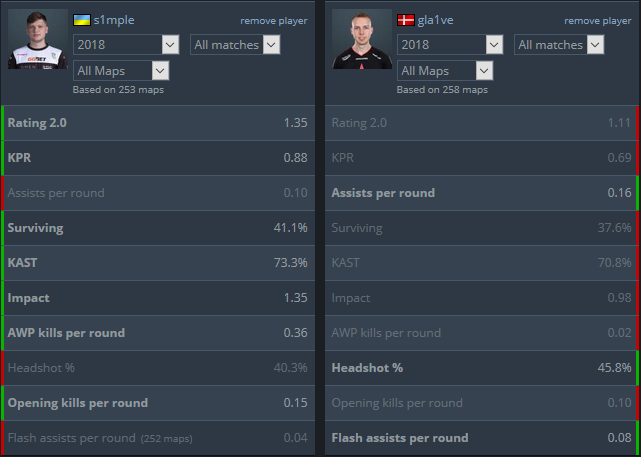 In Conclusion To CSGO Stats

Even with the new CSGO stat data available to recover from a Counter-strike match, it’s still doesn’t give us a full understanding of how a certain series of Counter-Strike played out. Now with the abundance of Counter-Strike tournaments, it has become very difficult to track every individual game. So even though stats give us some ground work for a better understanding of what happened in the server, it should never become the main reasoning of why some players did a better job than others. Each have their own different purpose to fulfil, and as a community, we must acknowledge that.